The video clip ‘Undugu’ (‘Brotherhood’) is about that ‘real brotherhood’ is not necessarily to be found with the ‘brothers’ you are born with, but that sometimes one might have to go out into the world and face all kind of hardships to find ‘real brotherhood’. The story in the video is weaved around a woman to show that the male word ‘Brotherhood’ not only reflects on male brotherhood, but is universal for all human beings. 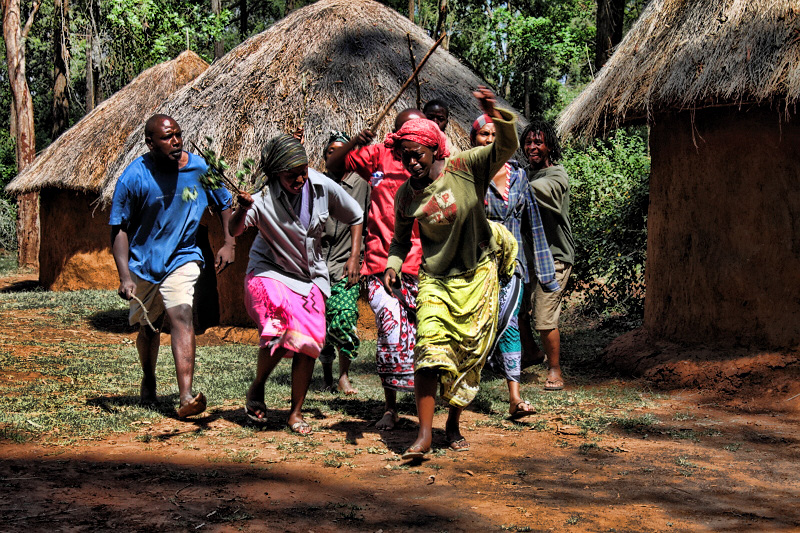 The video tells the story of a woman who is chased away from her village by her fellow villagers. She wanders senseless through the forest and the countryside, along highways, to end up as a beggar in a big city.

On the mean streets of the big city, she breaks down and a miracle happens: a broom drops from heaven and with that broom, she gets a job as a cleaner in an office.
In the office she is fascinated by the computers and one day, as all office workers have left, she dares to sit behind one and types something on the keyboard. By operating the computer, she has unlocked obviously another miracle, as money starts to pour on her!!!!

When the office workers return to the office and discover her, they start excessively applauding her.
She now turns into a smartly dressed office worker and makes a fast career, only to end up as a CEO.
As much as she is now a rich and successful power-woman, she still misses something.

At long last, one day she gets into her BMW and drives back to the village she was chased from, her village. The villagers are greatly surprised, but welcome her back, though it turns out that they are more interested in her car then in her. She watches in astonishment the villagers worshipping her car and this sight sets her free once and for all. She removes her CEO dress jacket and her high heels and walks away, this time out of her own choice.

The musicians play in this musical the role of storytellers, who are in most scenes somewhere in the background situated. Only the main singers Juma Tutu and Alai K come to the foreground of the picture when they sing/do their respective solos.

The video was produced as part of the ‘Spotlight on Kenyan Music’ series, funded by the Alliance Française de Nairobi, which acted as Executive Producer as well.

Commission details:
What: Story-writing, production and directing.
Who: For Juma Tutu and The Alliance Française de Nairobi.
When: The video was produced as part of the ‘Spotlight on Kenyan Music’ series and was launched in March 2011.