The Sea that thinks 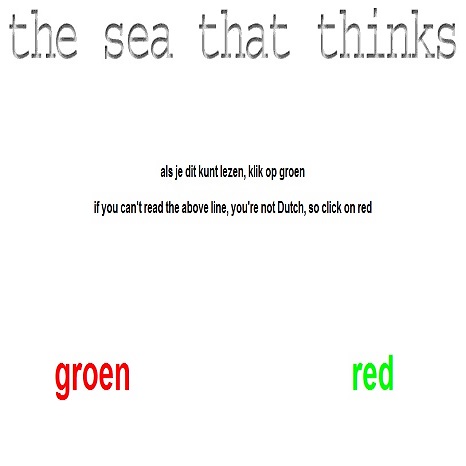 The movie
‘The Sea that thinks’ is a surprising film about itself. A film brimming with twists, turns and new angles. It focuses on Bart, a scriptwriter who is writing the script for this film. In the film, Bart himself plays the scriptwriter writing the script of ‘The Sea that thinks’. He types what he does and does what he types.
In his film, he finds the answer to the urgent question: how do we become happy? He uses stunning examples to show us that our world is only to be found in our consciousness. What is real and what is illusion? Do we believe in our dream world while we dream? Do we believe in the reality of film while we see it? And why? His combination of pictures and text has a hypnotic effect on the viewer. It provides an exciting, dislocating and humorous adventure.
Then it becomes apparent that the film is not about this tormented scriptwriter at all. In a game filled with optical illusions and continually changing points of view, the surprised viewers gradually find out they are looking at themselves: how do I observe? What do I assume to be true? What do I think I see? What do I think I am? The viewer turns out to bear a striking similarity to the Sea that thinks it’s a Tree.

The website
We all create our own reality, or do we? That is not only the core question of the movie, but also behind the website. As the movie is full with cheeky and audacious visual effects which set a surreal tone, the challenge was to resemble this surrealism in the website as well. I didn’t just want to make some kind of flyer-style website, but a piece of art in its own right, which actually entices a visitor to the website to make an effort to see the movie. Therefore the website is full with subtle effects, which you might not even notice at first, but after some time you might get a creepy feeling, not to be sure what you are actually looking at!

As the movie was originally released in the Dutch language but distributed with subtitles all over the world, we also had to create a bilingual website in Dutch and English. The website has also an order section included through which the DVD of the movie can be ordered.